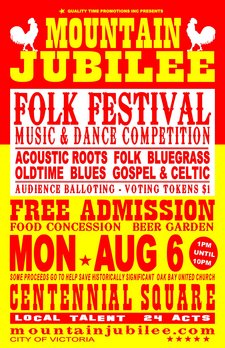 from Victoria BC
Broken Up - Confirmed: Dec. 11, 2013 (Archived)
A Mountain Jubilee will take place on 'BC Day' in the historic Capital City of British Columbia on Monday August 6 2007. The 'Jubilee' takes place at the City of Victoria's 'Summer In The Square' program in Centennial Square. Admission is FREE and the event will consist of Acoustic Roots, Celtic, Bluegrass, Folk, Gospel and Old-Time music, magic & dance.

The Festival starts at 1:00pm and runs until 10:00pm with twenty local talent groups supplying continuous performances every 20 minutes for 9 hours non-stop! The focus of the event is to raise awareness around Oak Bay United's Public Capital Campaign to save its historically significant church [built 1914] from demolition.

The 1st annual Mountain Jubilee is an old fashioned, fun, community event... it's a convention... it's a competition... it's a showcase of the rich local Island 'Folk' talent. The entertainers will compete for the most votes in a contest controlled by audience ballot voting. Twenty local entertainment groups will participate with the audience in this very unique event.

It is a pleasure to extend an invitation to local Island talent to gather at the 1st annual BC Day 'Jubilee' on Aug 6 2007. The central theme of the festival is 'grass roots music and dance of North America and British Isles' with intent to center stage the rich culture of acoustical string music & dance.

- Each band [group or single act] will have 20 minutes of stage time. Stage time will include setup, playing and takedown.

- Up to 20 competing acts will be eligible to enter the contest.

- Audience & competition participants will be able to cast votes all day long. All ballot boxes will be officially tallied just prior to the last set of the festival. The four fullest ballot box's will determine the winners. Prize money will be issued to all contestants, in exchange for tokens won, with the 4 top winners announced on stage and posted on this web-site.

- The large central balloting table[s] can be used by the participating entertainers to sell CD's and distribute flyers/business cards etc. Contestants should supply a large personalized 'ballot bucket' for token collecting.

- There's no entry fee for contestants and admission is FREE for the audience!

Everyone will be eligible to cast voting tokens, and everyone attending this Mountain Jubilee will be encouraged to exercise their 'right to vote'...

For more information and booking contact Ray France ASAP!
No audio samples have been linked to this profile.
No member roster has been entered (to link to musician profiles.)
Status: Broken Up
- Last confirmed Dec. 11, 2013
Submit info on this band to our admins