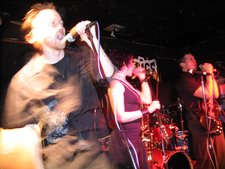 skatomatics@telus.net
Contact Info
Past Shows (55)
Wind in our sail.
Rudie can't fail.
The Skatomatics gonna get famous.
There's a punk rock angel watching over us.
--

“Vancouver’s Sweatiest Band" came together in a storage locker in Vancouver back in 2002 when a couple of locals bonded over their love for bands like The Police, Sublime, King Apparatus and The Clash with former members of Edmonton’s Mad Bomber Society and Halifax ska pioneers Dr. Skankworthy

In 2004, the Skatomatics released their first independent EP – Skatomatics for the People. It climbed the charts and reached the #2 slot on CITR’s college radio chart, outplaying groups like indie-kings Modest Mouse, all-Canadian buzz-band Broken Social Scene and even that dude Jack White beat up from the Von Bondies.

2006 sees the release of their first full-length CD: High Maintenance.

But what this band really lives for is hitting the stage and rocking the party. Oh yeah, and a limo full of strippers and coke would be totally nice too.

“…Vancouver is experiencing one of it's Ska revival frenzies. The Skatomatics are in the vanguard of this movement, and anyone fortunate enough to have witnessed one of their energetic, not to mention sweaty, live shows can attest that these guys are the real deal."
- Red Cat Records
No audio samples have been linked to this profile.

Status: Unknown
- Last confirmed Jan. 28, 2008
Submit info on this band to our admins