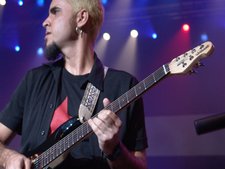 A veteran of the Havana music scene and a featured performer with many of Cuba’s most famed touring jazz bands, electric guitarist Elmer Ferrer whips up a heady blend of Latin jazz, rock and blues. This ferociously talented six-stringer has been justifiably compared with Jeff Beck and Pat Metheny. Ferrer put together the EFB in 2004 and has been making audiences worldwide take notice ever since. The Elmer Ferrer Band made an incendiary appearance at JazzFest a couple of years ago and we are thrilled to be able to invite them back.

Status: Unknown
- Last confirmed Apr. 30, 2009
Submit info on this band to our admins