Adam Kreeft
kreeft@undergroundoperations.com
Contact Info
Past Shows (17)
Somewhere en route, in a van that is about to break down after surprisingly seeing more of North America than it realistically should have, sit four young Canadians, with one thing in mind: 'Let's rip it.' After bringing their music from the basement to the stage in 2002, and having filled up every single weekend of their latter high-school years with DIY punk rock shows, Toronto's THE FLATLINERS always planned on touring relentlessly once they were finished with their tedious, routine-filled days of the teenage institution. They have stayed true to their intentions. When the final day was upon them, they jumped in a van and never looked back. That was two years ago...

Music has always been a world of creativity, though it is one equally inhabited by opinions. Upon writing what would become their long-awaited follow-up to 2005's 'Destroy To Create', and their FAT debut, THE FLATLINERS chose to not let any kind of apprehension enter the fold. "We figured 'Fuck it. We're just going to write a record that the four of us would want to listen to over and over again,'" says frontman Chris Cresswell. "I think the truest form of art is that which represents the artist for who they really are. No smoke and mirrors, no illusions. People would classify us as a certain kind of band in the past, but we really didn't have an outside perception in mind when we got together to jam the new record. That may sound a bit selfish, but in the end, this record is who we are."

Despite their relatively young age, 2007 marks the fifth anniversary of the band's inception, making it clear that THE FLATLINERS are no gleaming-eyed newcomers. With two full-length records, a handful of EPs and splits in tow, and a past tour schedule that could easily be used as bragging rights, these four Canucks have certainly learned a thing or two, allowing them to hone their skills on 'The Great Awake'. By sifting through their blistering and infectious punk rock swagger and it's grimy, soulful reggae counterparts, its easy to see how THE FLATLINERS have grown both as musicians and as songwriters, further cementing them as one of Canada's most prolific and hardest working exports.

The band's original line-up of Scott Brigham on guitar, Chris Cresswell on guitar and lead vocals, Jon Darbey on bass, and Paul Ramirez on drums has remained through the years, proving that you can't do this kind of thing alone. The band is seeing themselves in a new way on the eve of their brainchild 'The Great Awake', and though it can be argued that human evolution may not exist, musical evolution indeed does. "There's a newfound comfort level among us when we're playing these days. And it freaks me out sometimes how well we know each other as musicians, but its an amazing accomplishment that has tightened us up more than we could have ever imagined," Chris exerts with a smile. "I think we're ready to ruin the world."
No audio samples have been linked to this profile.
No member roster has been entered (to link to musician profiles.) 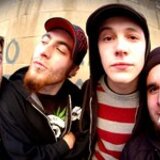 Status: Unknown
- Last confirmed Aug. 7, 2007
Submit info on this band to our admins