Brian Fredericks
brian@battleaxemusic.com
Contact Info
Past Shows (48)
With tens of thousands of albums sold worldwide and hundreds of show rocked, the word of mouth is spreading about Sweatshop Union’s style of conscious lyrics, highly musical beats, and high energy live shows that far surpass the average hip hop concert. Sweatshop began as a collective of Vancouver-based artists pooling resources to release an album, transforming into a group in the process. The crew, made up of Kyprios, Dirty Circus, Pigeon Hole, and Innocent Bystanders, released their debut album Local 604 in late 2002 via indie label Battle Axe Records. In support of the album, they created three music videos and toured Canada with Jurassic 5 and Blackalicious, as well as their labelmates Swollen Members and Abstract Rude. This was the beginning of a relentless touring schedule that has proven to be a key catalyst to solidifying their growing fan base and maintaining momentum.

2005 brought the release of the third Sweatshop Union album, United We Fall, featuring collaborations with Rob The Viking, Mad Child (Swollen Members) and DJ Revolution (The World Famous Wake Up Show). Canada was blanketed, more albums were sold, more audiences were rocked, and more accolades (including nominations for another Juno Award and MuchMusic Video Award) were received. In 2006 Sweatshop Union hit the road in the United States for the first time, giving their American fans a taste of what is to come. Since then, Sweatshop has rocked over 100 shows a year, a pace that that they have no intention of letting up.

Sweatshop Union’s fourth album, Water Street, is close to completion and is on deck for a release in August 2008. As one of Canada’s top selling independent hip hop artists Sweatshop will be busy rocking crowds across North America as they embark on their most extensive phase of touring ever, as they begin the campaign to create awareness for Water Street. In a time when hip hop music remains soulless and simplistic in the eyes of the mainstream, Sweatshop Union remain driven to deliver a deeper, more meaningful sound into the conscience of the masses.

“Substance and style working in perfect equilibrium. 4 out of 5.” - NOW Magazine

“There’s no arguing with the slickness of the music’s execution.” - The Georgia Straight

“Clever and astute. United We Fall hits the mark both viscerally and intellectually.” - This Magazine

“A fair comparison to the organic live sound of The Roots, one of the many different styles the Union transitions into with ease.” - Rapreviews.com

“Their lyrics, music, and videos have shown that hip-hop on the west coast was not a pop culture accident.” - Ottawa Xpress Magazine

“Distinct and diverse styles that blend together perfectly.” - MVRemix.com

Juno Award for Outstanding Rap Recording for United We Fall

Canadian Radio Music Award for Best New Artist (Dance/ Urban)
No audio samples have been linked to this profile.
No member roster has been entered (to link to musician profiles.) 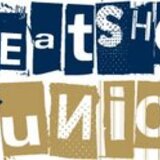 Status: Unknown
With their 4th album, Water Street out in 2008, member Kyprios just released his 2nd solo album and 3 more sub-groups are to release albums in 2010, Sweatshop Union are touring more than ever! - Last confirmed May. 8, 2013
Submit info on this band to our admins