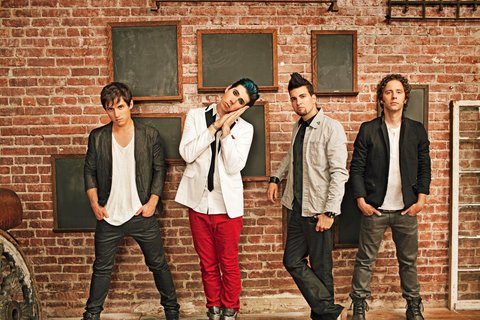 Welcome to Ever After. A fairytale and a single, 54 minute track stitched from 12 discrete songs—the most audacious songs Marianas Trench has ever crafted. Ever After is constructed around a story written by Ramsay himself and then finessed into an accompanying booklet. It’s an actual physical experience; a warm throwback to the album era when your music was more than a bunch of orphaned songs sitting on an endless iPod playlist.

It’s also the project that captures Marianas Trench at a soaring artistic peak. After the breakthrough of Masterpiece Theatre in 2009 and a lot of ensuing months on the road, Ramsay and bandmates Ian Casselman, Mike Ayley, and Matt Webb were eager to start recording again. They finally settled into Ramsay’s studio to begin work on their next theatrical masterpiece by the end of 2010.

“All the songs live on their own as songs, but they also serve the purpose of telling the story throughout the record,” he explains. As for the seamless hour-long symphony he constructed, Ramsay adds, “I wanted to do that on the last record but as a writer I wasn’t ready. I had to step it up, which is also why I decided to produce Ever After on my own. If this is all gonna tie together, then you really need to see it through yourself.”

The tale itself concerns the heartless Queen Carolina, the exiled King, and the stolen heart of his daughter Porcelain. We’re lowered into this barren and heartless Toyland through the title track; a sweeping epic that makes good on Ramsay’s promise that “some things are really over on the top” on Ever After. “It sounds like a chase scene,” he says. “I was, like, ‘If we're gonna do this, we're gonna do this right. We're gonna need 50 string players.' ”

After that Michael Bay-sized opener, we get what you might call the basic working unit of Ever After. “Haven’t Had Enough” has a lean ‘80s funk edge to it, as do skin-tight tracks like “Desperate Measures”, “B Team”, and the amazing “Stutter”, but with Ramsay’s jones for the Beach Boys and Queen-calibre vocal arrangements crash into something with the dimensions of Thriller-era Michael Jackson.

Ramsay is also playing up the underused R&B side of his voice on Ever After, turning the epic power ballad “By Now” into an emotional workout, soaring over the krushed groove of “Fallout”, and generally manifesting his inner soul man all over the place. It’s acrobatic work, but he was keen to push himself. “I like to sing in that style,” he says, “it’s something I really enjoy, but it’s gonna be a challenge live, for sure.”

“Truth or Dare” makes an even bolder statement with its choppy flamenco parts and a hook that sounds like a Maori singing backwards, but nothing touches “No Place Like Home” for outlandishness and high-flying ambition. On this climactic track, the band wraps up the third act of the story with a whirlwind battle and epilogue, piling stacked vocals on top of multiple switch-ups and fake-outs, making an end run through Brian May guitar and a touch of the Who’s “Baba O’Riley” before hitting a blockbuster-sized finish and a final, sweet coda played on a harp and a child's music box.

It’s insane. And brilliant. And it puts the cherry on top of Marianas Trench’s mad, multi-media vision. What Marianas Trench has done with Ever After is create the story and soundtrack to a dark Tim Burton rock opera that hasn’t been made yet. Hollywood, are you listening?
No audio samples have been linked to this profile.
No member roster has been entered (to link to musician profiles.)
Status: Available for Shows/Gigs
- Last confirmed Aug. 15, 2014
Submit info on this band to our admins