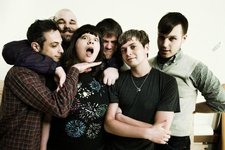 Event Photo Galleries (1)
Fucked Up is an experimental Hardcore group from Toronto, Ontario, Canada.
The band formed and played their first shows in early 2001. The initial practicing lineup consisted of 10,000 Marbles (Guitar), Concentration Camp (Vocals), Mustard Gas (Bass Guitar) and Chris Colohan (of Left for Dead/The Swarm fame, now lead vocalist for Cursed). Just prior to recording their demo tape, Concentration Camp moved to guitar and vocal duties were taken over by Pink Eyes (also known as Mr. Damian). Drums are played by Mr. Jo (also credited as G. Beat or J. Falco) and Young Governor was added as a third guitarist in 2007.
Following the release of the demo, the band embarked on a long series of 7” vinyl 45 rpms. Unlike many of their contemporaries, the band shunned full length LP or CD formats, preferring to output their music two songs at a time. While some record distributors refused to carry the singles, they were generally released to broad appeal, receiving glowing reviews in many punk fanzines. The artwork and feel of the records was a tribute to the Dangerhouse Records era of punk vinyl.
The band released the “No Pasaran” 7” in May of 2002. The records aesthetic and philosophy was greatly influenced by anarchism and the participation of anarchists in the Spanish Civil War in particular. The cover and insert featured anarchist propaganda posters and portraits of Spanish farmers and peasant soldiers.
No audio samples have been linked to this profile.
No member roster has been entered (to link to musician profiles.)
Status: Unknown
- Last confirmed Mar. 25, 2009
Submit info on this band to our admins