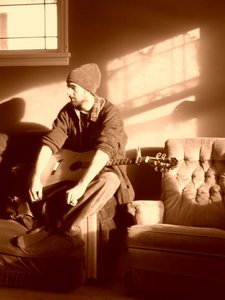 My real name is Jeff Andrew. Shade Tree is my all-purpose stage name for me and whoever else is playing with me (usually the mellifluous Meg Iredale - they called her Maggie Irish, in the old country...). Could be just guitars and harmonica and stompin' boots, but could also be fiddles and banjos and double bass and accordion and whatever else we can find in the alley behind the pawnshop.
I like to ramble...I been all over. I grew up in the Ottawa valley, now I live on the west coast of BC. Pick a small town off the map out here - I've probably planted trees near it, camped outside of it or hitchhiked thru it. A lot of music out there in the hills...I like to fix up and play old folk instruments and see how much dirt I can find in my voice. I write songs about wandering pilgrims, vanishing angels and how to build worlds from the creaking spiderwebs and rusted madrigals that haunt the attic of your dreams. For now you can find me in Victoria, playing Tuesday nights at JK Do Forno Cafe in Fernwood Square.