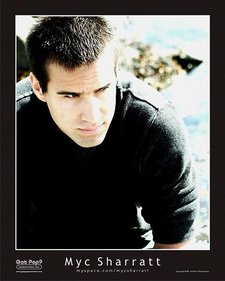 Myc Sharratt has earned a large fanbase in and around his hometown of Nanaimo, BC. His ability to capture an audience with his warm voice and mature guitar playing is evident from the moment his toes touch the stage. Sharratt grew up listening to his parents record collection. This included the music of his greatest influences Stevie Ray Vaughan, Jimi Hendrix and Eric Clapton. At age 15 Sharratt picked up the guitar and within two years he was wowing audiences earning back to back spots in annual international guitar festivals. After a brief stint in Malaspina University's influential Jazz program Sharratt realized he was more interested in performing music than studying it. In November 2004 Sharratt independently released "Incomplete" a collection of both full band and acoustic recordings. Full of creative songwriting and striking guitar playing the album captures the honesty and passion of an emerging talent. "Incomplete" has not fallen on deaf ears as Sharratt consistently sells out shows at such local nightspots as The Queen's Hotel. He has earned a reputation as a great live act opening shows for such established artists as Blue Rodeo, Corb Lund and the Hurtin Albertans, David Gogo and 54-40 as well as headlining well over 100 shows annually. In the summer of 2005 Sharratt took to the road and performed in an acoustic duo with friend Dave Adnams. The tour took the pair to venues all over Western Canada including a stop during the Calgary Stampede. In May 2006 Sharratt released his sophomore album "Blueprint". The full band electric effort showcases his ability to write memorable melodic hooks and puts the medicine-in-the-dog-food sort of speak by dispersing wailing blues guitar riffs and distinctive rhythmic textures within those radio ready pop hooks. Sharratt is currently touring in support of "Blueprint" all over North America including a sold out stop at the Port Theatre, a 808 seat venue, in his home town of Nanaimo. Myc Sharratt knows how to captivate an audience with his voice and a guitar and with a dedication and genuine passion for the craft of songwriting Sharratt promises to be around for awhile.