from Comox Valley BC
http://www.chekoroots.com/
Available for Shows/Gigs - Confirmed: Jun. 14, 2016 (Awaiting Update)
Past Shows (7)
Event Photo Galleries (1)
Cheko And The Lion Rockers, coming out of the Cowichan Valley are one of the West Coast’s strongest links to roots reggae and Rastafari culture. The band rocks a classic reggae sound, anchored by Chekos heartfelt, conscious lyrics. A native of Mexico City, Cheko infuses his ultra rootsy sound with the skank rhythms he discovered in the barrios of his hometown. Through his own band, Skanky Roots (formed in 1999), his collaborative work with musicians like Los Rastrillos and Ali & the Budz, and now the Lion Rockers, Cheko has honed his musical chops into a supreme laser beam of reggae brightness.
No audio samples have been linked to this profile.
No member roster has been entered (to link to musician profiles.) 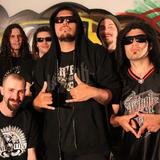 Status: Available for Shows/Gigs
- Last confirmed Jun. 14, 2016
Submit info on this band to our admins