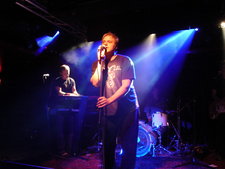 Mark Osachoff
anthill_edge@msn.com
604 671-9077
Contact Info
Past Shows (18)
Fueled by hours of children's tv programming and a genuine sense of social awkwardness, Anthill is about the essence of getting on with life in the face of adversity and fear. "Carry on, carry on my backwards song".

2009's album release, "Relationships 4 Dummies" explores the pitfalls of conflict and the rewards of communication. "I'm terrified to let you in, but I'm going where I've never been".

Songwriter and vocalist, Mark Osachoff sets his personal diary to music and brings the listener into his daily challenges of making relationships work. "Breathing, holding onto your frustrations - in an endless destination".

Producer Brian Minato (Sarah McLachlan, The Blue Alarm, Wild Strawberries) keeps the simplicity of the songs intact, adding layers of textured sounds to create a beautiful myriad of harmony and explosive energy. The record was mixed by Blair Calibaba (Sum-41, NoMeansNo) and Paul Forgues (NIN, Slayer) giving it some solid depth and an added pop-fizz punch.

Drummer Don Short brings his years of experience and considerable skills to the live shows. Guitarists Joe Cruz and Jeff Younger infuse the kaleidoscope of recorded guitar parts on the new album with their own personality and charm.

From the early, soul searching days of the 2004's "Ascending", Anthill has matured into a songwriting unit that tries to dispense with the obvious. "It's true that I burned you, but I burned myself in the end. I'll do what I can to make it good again".

Tom Harrison of The Vancouver Province described Anthill's 2006 release "Waiting for the Sun" as "a quantum leap beyond its first album". By combining strong pop sensibilities with some very catchy and memorable hooks, 2009's "Relationships 4 Dummies" goes one step further in the band's evolution towards creating a lasting legacy of music.