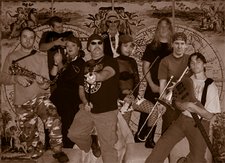 Sticky Kola
kingbong@hotmail.com
Contact Info
Past Shows (50)
From the city that brought you Diana Krall, Nelly Furtado, Hot Hot Heat, and many others, comes a band with the new sound of the twenty first century... KingBong!
Formed in 1999 as a nine piece collective of some of western Canada’s finest Jazz, Punk, Funk, Ska. Metal, and Classical musicians the band has exploded across the musical landscape of the Canadian north.
With a 21st century sound that is funky, groovy, and gritty, members find roots in great Canadian bands of the 1970’s like Blood, Sweat and Tears, and BTO, combined with the punk and ska sounds of the 1980’s, and the politics of the new world order. KingBong busts through genre lines mixing influences and styles that have no right working together but bond on a musical level that translates into sold out shows, and a mixed fan base that would stun any industry analyst.

The band has been featured on BBC radio in England, CBC radio in Canada , CTV Television, several print and internet music publications, and in August 2004 labeled as ‘ unstoppable’ in Cannabis Culture Magazine, with distribution of 80,000 copies world wide. KingBong’s popularity is growing internationally with invitations to play in Australia, the EU and England, while national and international press coverage, and sold out shows in several Canadian cities, is creating significant monkey momentum. The KB web site downloads 2 gigabytes a month of recorded material to a growing fan base around the world with internet CD sales in Korea, Japan, Holland, Canada and the USA.

Craig Tiesson, Jamie Renney, Alex Cape, David Giblin, Billy Club, Kelly McCausland, Pauline Edwards, Kim Denness-Thomas, and front man Sticky Kola combine talents and back grounds to create a sound rich with horns and violins, delicate and groovy with flute and congas, sexy and powerful with backing vocals, and raw and heavy with a monster rhythm section, ripping guitars, and the “cream over crushed stone” vocals of a front man bent on changing your mind about the world.
No audio samples have been linked to this profile.

Status: Broken Up
- Last confirmed Apr. 10, 2008
Submit info on this band to our admins