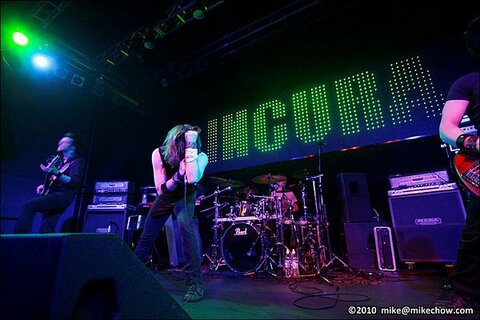 
Everything about Incura appears to be as unique as their name, and the deeper you dig, the more you realize how true this sentiment really is. Their new self-titled EP is the debut release for Coalition Music /Warner Music Canada and their first taste of new music since an independently released EP in 2009.

Incura’s music is virtually unclassifiable. Genre-hopping across many different styles of hard rock and clearly inspired by the love of theatre, Incura takes you on a thrilling and adventurous ride. Their influences are an impressive, cross-cultural mix of the expected and the unexpected. Savage, crunching metal grooves segue into technical prog-rock prowess; classic rock arrangements nestle alongside the operatic drama inspired by Andrew Lloyd Webber, while Kyle Gruninger's passionate falsetto takes centre stage.

Incura sets a rare musical scene, one that is so compelling it lures you deeper and deeper with each repeated listen. Epic, grandiose arrangements. Dramatic crescendos, building tension as the drama unfolds. A manic vocal delivery from a breathless circus leader. Lush, complex arrangements. Intricate rhythms. Staccato beats. Layered, textured, beautiful four part harmonies lulling you like a lover's serenade. These are the images and feelings Incura evokes.

This creative passion and attention to detail impacts all that Incura does, including their blistering live performances. It was this unparalleled intensity and energy that brought them to the attention of fans and industry professionals alike. Refusing to hide behind studio wizardry or pre-recorded tracks, each of the five members delivers a highly skilled level of musical complexity that is exhilarating to watch.

Although Incura is almost impossible to categorize for the ease of radio programmers, playlist creators and reviewers trying to find a category for them, Incura will ultimately fall under the Hard Rock classification. This is the most basic category yet it still doesn't do any justice to the sheer creativity of this quintet.

It's not the type of music you would expect from a young band who comes from a small Canadian city in the Prairies. And perhaps that's why the band packed their bags and moved to Vancouver shortly after forming in the late 2000’s. It's clear this group has an original and creative vision for both their music and artistry. Even the band's name stands alone, with no other like it. In fact, it's a word they even created themselves by combining their old band name with that of a spell from the Final Fantasy games. And with that, Incura was born.


Incura spent a full two years writing numerous songs that would ultimately come to life on this new self-titled 6 song release. Yet despite the length of the creative process, which could cripple some young bands, the frantic urgency of this production is palpable. The songs literally scream to be let out, revealing a story waiting to be told and aching to be heard.

Their message is simple; be a leader not a follower. Always question why. Be your own person. It's this powerful and positive projection of passion, self-worth and tenacity that unites the band with their devout fans. Their emotional intensity is an empowering release.

In a fitting analogy to Phantom of the Opera, Incura seems to revolve around the beauty of a singer who becomes the obsession of a mysterious, disfigured musical genius.

Incura is indeed a vision, realized.

Status: Available for Shows/Gigs
Ready and willing - Last confirmed Jul. 6, 2017
Submit info on this band to our admins