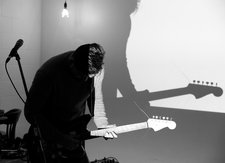 Andrew Lee
info@imr.ca
604-626-9364
Contact Info
Past Shows (69)
Formed over a decade ago, Vancouver-based In Medias Res has risen from a fledgling act full of potential to one of the most lauded performers in the city. Re-teaming with esteemed producer Jonathan Anderson (Aidan Knight, Jordan Klassen) and mixed by Dave Carswell and John Collins (Tegan and Sara, The New Pornographers), their latest album released on File Under: Music, It Was Warm and Sunny When We First Set Out, has garnered high praise from critics across North America.

Recently, the band has taken on a new shape, with principal songwriter and frontman Andrew Lee striking out on tour himself with a rotating cast of players. This new formation has been met with great success, and allows for exciting new interpretations of the music including unique collaborative performances with renowned visual artists at the Vancouver Art Gallery and the Centre for Performance Research in Brooklyn.

In Medias Res has shared the stage with such acts as Death From Above 1979, Cursive, Kurt Vile, David Bazan/Pedro the Lion, Damien Jurado, Porcelain Raft, Yukon Blonde, Library Voices, Dinosaur Bones, Rosie Thomas, Black Rebel Motorcycle Club, Moon Duo, Sparta and many others.
No audio samples have been linked to this profile.