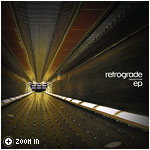 Ben Hulse
band@retrograde.ca
604-251-4474
Contact Info
Past Shows (25)
Just released headphones EP as a forerunner to the early 2005 sophomore album this frequency we share. "Digging in the Dirt" off the EP is receiving strong radio support. EP and new album were recorded in Austin, Texas with producer Dwight Baker.

Recently signed a European licensing deal with Atenzia Records of Sweden for the new album. Release dates will be announced soon.

Headlined the 2nd stage at WakeWest festival late August 2004 in Vancouver with Bif Naked and The Tea Party following on the main stage.

Appeared on a Brine Sports compilation released in the US October 2004 along with American Hi-Fi and others. Initial pressing was 10,000.

Performed at two of Canada’s largest festivals two years in a row. Alberta's "Stage 13" Festival (attendance: 30,000+) and Saskatchewan's “Rock'N The Valley" (attendance: 50,000+) alongside the likes of Nickelback, The Tragically Hip, Our Lady Peace, Third Eye Blind, 3 Doors Down, Finger Eleven and more.
No audio samples have been linked to this profile.

Status: Broken Up
- Last confirmed Mar. 10, 2014
Submit info on this band to our admins