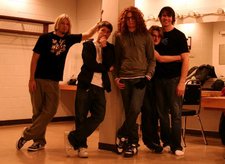 Joe Donohue
chessmasty@hotmail.com
507-2310
Contact Info
Past Shows (9)
Enseven has ended. Created originally from projects stemming from Rob Wilkinson and Joel Fox, Enseven eventually attracted the likes of Matt Gladman and Joe Donohue. This line up continued on and burned strong for some time. Solid nu-metal and primal rock slowly turned to melodic soul with the addition of Dane Currie. Due to a lack of interest in the new sound and direction of the project, Joel Fox was eventually replaced with Torence Sandhals. The new assembly deemed perfect with Torences' previous experience working with Dane in earlier aims. The bands musicianship grew even stronger than before. Testing their mental and physical musical limits as best as they could, the five continued on, but knew in their hearts that what they came to stand for was not accuratly represented with Enseven. A new project is in assembly...
No audio samples have been linked to this profile.

Status: Broken Up
currently working on new project - Last confirmed Mar. 3, 2008
Submit info on this band to our admins