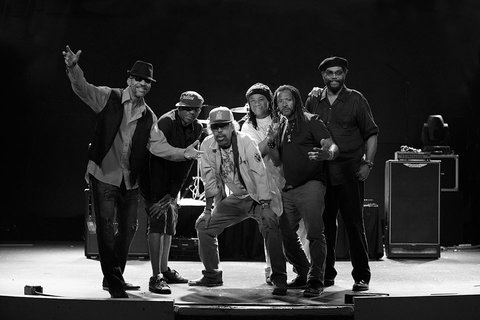 Reggae from Jamaica
http://www.acroots.com/roots/thrdwrld.htm
Available for Shows/Gigs - Confirmed: May. 29, 2015 (Awaiting Update)
Past Shows (4)

With 10 grammy nominations, performances on six continents, and four decades of hits, Third World have earned the title of “Reggae Ambassadors”. Born as a roots reggae group in the early 70s, Third World have made a name for themselves by constantly defying conventions and expectations. Despite many of their contemporaries sticking to their guns, Third World always evolved, bringing in elements of funk, disco, R&B, soul, hip-hop, and dancehall as the years progressed. The band has proven itself to be open to experimentation as well, incorporating instrumentation such as classical strings not normally associated with the reggae genre. Bass player Richard Daley describes the band’s philosophy succinctly: “We [take] roots reggae music and put branches on top of it.”

This innovative hybrid of various styles has been called “reggae fusion” by many music writers and historians, a style which has since been performed to chart-topping success by artists such The Police, Matisyahu, and modern pop superstars Magic! While Third World first hit the road 40 years ago as the support act on Bob Marley’s debut world tour, the group hasn’t lost its passion for creating high-quality reggae. This is perhaps best exemplified by the fact that they released their 22nd full-length album in 2014. While original lead singer Bunny Rugs passed away last year, the sextet is still going strong with original members Daley and guitarist/cellist Stephen “Cat” Coore leading the way. Their performance Friday night is sure to be one that reggae fans both young and old will never forget.

View all tracks for this artist (2)
No member roster has been entered (to link to musician profiles.)
Status: Available for Shows/Gigs
- Last confirmed May. 29, 2015
Submit info on this band to our admins