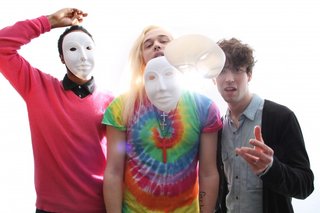 kevin/louis
fakesharkrealzombie@gmail.com
Contact Info
Past Shows (82)
Event Photo Galleries (1)
At some point an artist has to release his grasp on some of what he has held dear and even shaped his work. Kevvy Mental from Fake Shark Real Zombie has moved up to another plateau; he is a changed man, but still with the same youthful energy he’s always had. “I fell out of love with hardcore because it’s missing character” explains the electrically-charged frontman.

“The new album, called Liar, is a result of a new direction… allowing my love of soul, Motown, hip hop and old school punk rock to show itself.” The results are daring. Not just musically, because with a complete lack of double-time guitar vomit on Liar, there is a risk of alienating die hard FSRZ fans who expect that trademark sound. “There’s a song on the record called ‘Fuck Kevvy’ and in that song I address the change as evolutionary. I write records for myself, as if I were trying to come up with my favorite record, and the types of things that satisfy me musically are more like witty phrasing or lyrics rather than just trying to write the fastest songs in the world. The goal before was to sonically assault the listener with time changes and now I’m more into a cool phrase instead of thirty guitar riffs in one verse. It’s still insane music, maybe even more insane, it’s just not the expected cacophony.”

Kevvy has kept fans waiting this long mostly because his career as a top level pop music producer has exploded over the last few years having worked with acts like Carly Rae Jepsen and Matt Webb from Mariana’s Trench. With his new knowledge and relationships, our hero Kevvy Mental has absorbed the idea that “Do It Yourself” does not necessarily mean “Do It Alone” and has enlisted a menu of guests to shine on his new album. Jimmy Urine from mega popular industrial-jungle-pussy-punk outfit Mindless Self Indulgence, Care Failure of Die Mannequin fame, Steve Bays of Hot Hot Heat and the legendary Henry Rollins all shake hands with specific tracks on Liar, with each guest having had their respective starts in original punk rock.

Fake Shark Real Zombie are looking back to look forward in a way only Kevvy Mental’s exploding brain knows how to.
No audio samples have been linked to this profile.