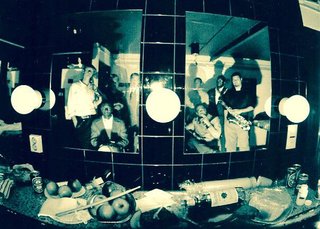 Formed in L.A. at the tail end of the eighties, Hepcat are tried and true veterans of the North American ska scene. Guided by a reverence for the original reggae, rocksteady and dancehall of Jamaica, the band came through with their first album on Moon Ska Records in 1993, the seminal Out of Nowhere, followed three years later by Scientific. Both records solidified Hepcat as one of the preeminent ska bands of the era, a reputation well-earned by their versatility and consistency. The group dominated the international ska circuit for the next decade, releasing Right On Time in 1998 on Epitaph’s Hellcat imprint (later followed by Push ‘n Shove in 2000), headlining tours in North America and Europe, and participating in festivals across the globe. From this relentless dedication, Hepcat established an unwavering and expansive fanbase.

However, the band retreated from the limelight in the early aughts, going through several line-up changes and only playing intermittent shows near their home base of L.A. In 2004, their hit debut record was re-released with additional bonus racks, further solidifying their longstanding popularity. However, this period was also marked by tragedy by the passing of long-time bassist David Fuentes. But the group persevered, and as of 2007, the reinvigorated Hepcat, including vocalists Greg Lee and Alex Desert, have secured their place as one of the most consistently impressive ska bands today.

Although they initially made waves with their focus on a classic, soulful sound reminiscent of the first wave of ska, Hepcat has spent years refining their music, with laid-back grooves, bright harmonies, and an unmatched rhythm section. Through the incorporation of elements from jazz, swing, R&B, as well as traditional Caribbean and Latin music, the band has produced a sound that is wholly their own, reflected in their diverse fanbase and their worldwide appeal. Hepcat have toured with the likes of The Skatalites, The Specials, Rancid and Desmond Dekker, and have even made an appearance on Late Night with Conan O’Brien. The band is known for the positive atmosphere of their live shows, and currently working on a new album.

View all tracks for this artist (2)
No member roster has been entered (to link to musician profiles.)
Status: Available for Shows/Gigs
- Last confirmed May. 28, 2015
Submit info on this band to our admins