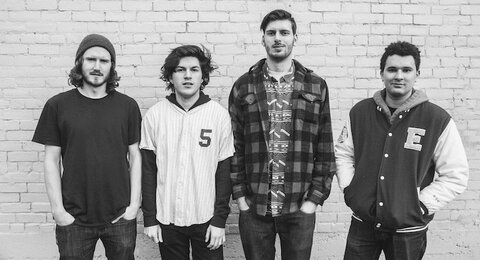 “Our music is inspired by fun,” says JPNSGRLS drummer Graham Serl. “We have such a good time playing our songs loud and fast. We get sweaty and get people dancing.”

Singer Charlie Kerr nods in agreement and adds, “That’s pretty much the modus operandi of what we’ve been doing since we were 17: what can we do that will get people excited?”

JPNSGRLS — pronounced “Japanese Girls” — formed in Vancouver in 2010, but their origins date back even further, to when Kerr and guitarist Oliver Mann met while playing in separate bands in high school. After discovering a wealth of shared influences, they joined forces under the name the Beauties, and the buzz surrounding the group attracted the attention of Light Organ Records.

The momentum continued to build once the lineup was solidified with the powerhouse rhythm section of Serl and bassist Chris McClelland, and JPNSGRLS was born. Their name was inspired by the female Japanese rock band Mass of the Fermenting Dregs, with the vowels later removed to make sure fans got what they were googling for!

They released The Sharkweek EP in 2013, its diverse sound making room for barbed wire guitar riffs, emotionally aching pop-rock, and even futuristic electronics. This grab bag of styles was achieved over months of experimentation, with much of the recording taking place at home and in various DIY spaces.

“We wanted to get it sounding as live and raw as possible,” Mann says, noting that nearly all of the parts can be replicated live. Kerr offers, “Something we said a lot in the studio was, ‘What would the Pixies do?’ We went with simplicity a lot of the time, and I think that’s a really good thing.”

This less-is-more approach makes Circulation a whirlwind of straight-out-of-the-garage noisiness and earworm hooks. It starts with the feedback squeal of combustible opener “Smalls”, a song that explores the excitement and self-destruction of drug use and takes its name from the classic coming-of-age film The Sandlot. This leads into “Tiger,” which shifts between spiky riffs and cloud-scraping, vintage pop choruses that feature Bays on backup harmonies.

Elsewhere, “Southern Comforting” is an atmospherically echoing scorcher that explores toxic relationships — both with people and with alcohol — while the thundering “Mushrooms” takes its title from the Sylvia Plath poem of the same name and is an anthem about fighting back against oppression.

The record was mastered by world renowned engineer Greg Calbi (Yeah Yeah Yeahs, Tame Impala, MGMT) and presents JPNSGRLS as a force to be reckoned with as they hit the road once again in 2014. Their busy touring schedule started with July Talk support dates in November 2013 and continues with shows opening for Mounties across Canada this March. Still more outings are planned for later this year.

“I wanted to prove something,” Mann says of Circulation. “This is our album. This is what our rock ‘n’ roll sounds like.”
No audio samples have been linked to this profile.