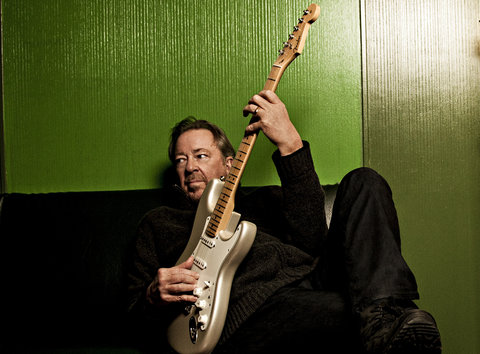 A casual listen to the Boz Scaggs discography makes one thing obvious: Boz Scaggs is both a musical seeker and a man of sizable talent as a singer, songwriter and guitarist. His explorations in blues and R&B, Rock and Jazz have produced lasting work and a career that has brought with it acclaim, a loyal followin, and an enduring respect among musicians.

With MEMPHIS (429 Records), his first studio album in five years, Scaggs looks back musically and biographically. (His father and grandparents are from Memphis, as is his wife.) “I had been thinking about a record that involved going back into my past and finding songs that match my style and my voice,” Scaggs says. With producer Steve Jordan and a crack band he puts a distinctive touch on classics like “Rainy Night in Georgia,” “Corinna Corinna,” and “Mixed Up, Shook Up Girl,” as well as on a couple of originals. Thirteen tracks were recorded in three days at the city’s landmark Royal Studios, where the late Willie Mitchell produced so many of Al Green’s and Anne Peebles’ legendary albums.

“The project just fell out naturally,” Scaggs says. “It didn’t require working over takes or a lot of revising. Choosing the material came, to some degree, out of the work I’d been doing with the Dukes of September (a band featuring Donald Fagen, Michael McDonald and Boz). We’d considered hundreds of songs over the last three years so a number of these had been spinning around in my head for a while. Then when I sounded Steve Jordan about producing the record, his reaction gelled so completely and instantly with mine. Was it the first or second conversation we had where I thought he was reading my mind: Royal Studios in Memphis? Ace players like Willie Weeks and Ray Parker Jr. and Charles Hodges? YES.”

Raised in small towns in Oklahoma and Texas, Boz Scaggs took up the guitar at age 13. “As a kid in the Fifties I was swept away by music and radio. It seemed there weren’t enough hours in the day to keep up with that first wave of Rock and Roll coming out of (top 40 station) KLIF and (the local R&B station) KNOK. At night I had WLAC Nashville with deeper Blues and R&B out of the greater south, Jazz from Chicago’s WLS and out of Dallas on WRR an amazing show called Cat’s Caravan where the DJ Jim Lowe took us to school on Muddy Waters, Lightnin’ Hopkins, Memphis Slim, TBone Walker and the Delta and Chicago masters. My high school friend Lewis MacAdams later wrote about that program, ‘I embarked on a journey each night into the life I wanted to live.’ That was me, too.”

William Royce “Boz” Scaggs started playing in bands during high school in Dallas in the Sixties. He entered college at the University of Wisconsin in Madison and soon after decided instead to devote himself to journeyman playing around campuses and various clubs and resorts. Scaggs’ guitar and voice provided his self-described “ticket to ride” as he left the States to travel in Europe, the Middle East and Asia. He developed a club following in Sweden and began his recording career there in 1965 with a solo album for Polydor. Curiosity along with yearning for a Blues and R&B band brought him to San Francisco in 1967. After a stint with fellow Texan, Steve Miller, on several albums, he signed a recording contract with Atlantic Records and debuted with BOZ SCAGGS, produced by friend and Rolling Stone founder, Jann Wenner. That record featured the renowned Muscle Shoals Rhythm Section, Duane Allman and the slow-burn-to-high-heat track, “Loan Me a Dime.” Critical acclaim followed, as did a long-term relationship with Columbia Records. Boz would make seven records for Columbia including MOMENTS, BOZ SCAGGS AND BAND, MY TIME, and SLOW DANCER, and featured songs such as “We Were Always Sweethearts,” “Dinah Flo,” “You Make It So Hard,” and “Slow Dancer.”

Then came the multi-platinum 1975 release, SILK DEGREES featuring hits like “Lowdown,” which won the Grammy Award for “Best R&B Song”, “Lido Shuffle,” “What Can I Say” and the ballad “We’re All Alone,” which became a worldwide hit for Rita Coolidge. Following SILK DEGREES was DOWN TWO THEN LEFT, MIDDLE MAN and HITS, a compilation that featured the as-yet-unrecorded “Miss Sun” and the song from the motion picture Urban Cowboy, “Look What You’ve Done To Me.” Scaggs sat out most of the Eighties, touring sporadically and releasing one album in 1987, OTHER ROADS. “In 1980, I decided to take a hiatus from the music business. I had intended it to be a six-month break, but I found when I got away from it that I wasn’t ready to jump back in. I had family matters to attend to. And at the bottom of it all, I just didn’t have any music in me, no creative urge at all. Music had become a routine.”

The Nineties began what Scaggs calls chapter two of his career. An invitation by Steely Dan’s Donald Fagen to join his New York Rock and Soul Revue teamed Scaggs up with Steely Dan co-founder Walter Becker, Michael McDonald and Charles Brown among others. Scaggs also signed a contract with Virgin Records and made an album of original material, SOME CHANGE, and then the Grammy-nominated COME ON HOME, a collection of R&B classics and originals featuring a crack rhythm section with horns. With the album DIG, Scaggs embarked upon a project he regards as one of the most important and mature works of his career. It featured production and writing with old friend and SILK DEGREES collaborator David Paich and ace guitar player/producer Danny Kortchmar. The record’s fate was tied to its 9/11/2001 release date and as a result it barely saw the light of day. FADE INTO LIGHT was his final release on Virgin Records and then came two albums of jazz standards. The first, BUT BEAUTIFUL released on Gray Cat Records, featured a traditional quartet and went to #1 on Billboard’s Jazz chart; SPEAK LOW, arranged and produced by Gil Goldstein for Verve Records, featured a string quartet with harp and woodwinds. “I’m not a jazz musician or singer,” Scaggs says, “but it showed me a whole new world of vocal expression. It was important to me in the way that I perceive music, in terms of harmonics and in using my voice as an instrument. These records were incredibly challenging, like nothing I’d ever done before.” The New Yorker, commenting on Scaggs’ performance, called him, “one of the few middle-aged pop stars to convincingly delve into the Great American Songbook.”

In addition to touring extensively with his own band, Scaggs continues to work with Donald Fagen and Michael McDonald as The Dukes of September, most recently a playing a 47-city tour to rave reviews, performing their own material along with R&B and Soul classics. Within that collaboration, throughout his career and especially evident in MEMPHIS, Scaggs’ unique voice and trademark sound make plain his abiding respect for a wide spectrum of American roots music.
No audio samples have been linked to this profile.
No member roster has been entered (to link to musician profiles.)
Status: Unknown
- Last confirmed Apr. 12, 2014
Submit info on this band to our admins