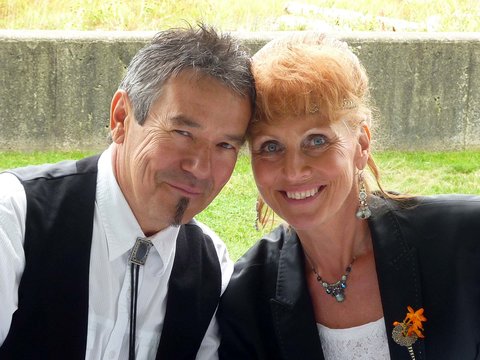 Saskia Delaronde
saskiadelaronde@gmail.com
Contact Info
Past Shows (3)
Saskia & Darrel are practicing spiritualists, long distance hikers, and part-time vegetarians. In their long and speckled musical careers they have taken day-jobs and were incarnated as loggers, fire-camp cooks, real estate aide-de-campes, and gandy-dancers. Ultimately though, despite the better advice of their children, love of music won out and they escaped reality by promising each other that they could sustain a life-style touring the world and playing folk music. And so they did.

Saskia is a singer. She was born a singer. As a little girl she was one of those precocious wee darlings you see accompanying everything they do with a musical score, singing themselves into and out of each day. She sang in school. She sang in church. She sang to release that incredible pounding pressure that singers get between their eyes that only eases if you let it out in glorious ecstatic waves. Close your eyes and listen to her perform a great sweeping ballad and you'll forget that you're a taxpayer.

Darrel only ever breathed ate lived loved and dreamed about playing guitar. In school he drew pictures of guitars on his notebooks. By the age of 13 he was in a working dance-band. He never could imagine a life without guitars filling every room around him. His only other passion was writing; and when he discovered song-writing, the die was cast. His playing style today is understated, as he spent many years on the road as a lead guitarist.

Great Plains are a veteran touring act; with an easy, crowd-friendly style that instantly endears them to any audience. This genre can only be described as Canadiana; real songs drenched in our culture and heritage delivered in a comfortable highly skilled set. Their lead-in stories are said to be equally as entertaining as the songs themselves, served up with a liberal doses of self-poking humor.
A taste of Celtic, a dab of bluegrass, and lots of engaging tales wrapped around extremely ear-wormy melodies makes this a show that many people can't wait to re-attend.

Status: Unknown
- Last confirmed Mar. 13, 2014
Submit info on this band to our admins