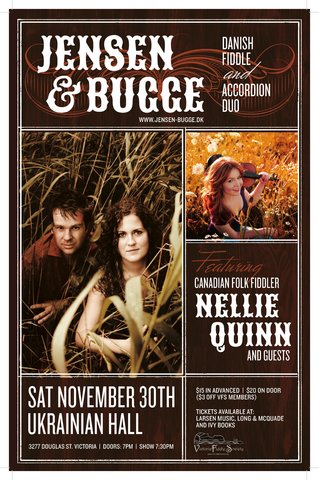 Nellie Quinn
info@nelliequinn.com
Contact Info
Past Shows (1)
The duo JENSEN & BUGGE has played together for 12 years, despite their young age. They have been touring in the States for 8 years. They last played no less than 14 concerts featuring accordion player Dwight Lamb of Onawa, Iowa. This year in June (US) and September (Denmark) they are back on the road together.

Both Mette and Kristian have won coveted Danish Music Award Folk prizes (Danish Grammy). In 2007 Mette Kathrine Jensen was awarded traditional artist of the year, and in 2006 at the same event Kristian Bugge received the awards for debut and instrumentalist of the year! Recently the duo received the "Traditional Music Award" at Danish Music Award Folk November 2012!
No audio samples have been linked to this profile.

Status: Unknown
- Last confirmed Nov. 19, 2013
Submit info on this band to our admins