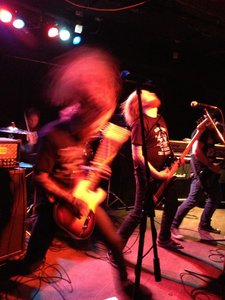 Despite the fact that Calgary has always been known as a rock and roll kind of town, there has been a significant dearth in bands with an actual backbone as of late. A lot of the indie world may have traded in their death wishes for higher pursuits, but a group of four dirtbags in Calgary remain steadfast on their path towards sex, drugs and rock and roll. Daywalker is the sound of thunder galloping down from the mountains, trident in hand and fists ablaze, raised high in the cool night air.
Daywalker first came together after Sled Island 2012, when, after being inspired by all the talent around them, Kevin P. (bass) and Adam (guitar) decided to join forces once again in service of rock and roll. their vision was immediately clear: play loud, fast, brash and brazen rock and roll that took no prisoners, gave no quarters and made no compromises. The final lineup fell into place quickly thereafter: they recruited Kevin N. on drums and Erik on guitar and started to click as a band together right away. It wasn't long thereafter that they landed their first gig opening up for Fucked Up at the Palomino for the Calgary Tattoo and Arts Festival after-party.
No audio samples have been linked to this profile.
No member roster has been entered (to link to musician profiles.)
Status: Unknown
- Last confirmed Jul. 17, 2013
Submit info on this band to our admins