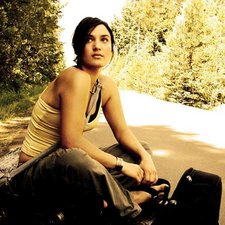 Hayley Sales spent the first years of her life surrounded by music. She lived inside music, inside the beats, the rhythms and melodies. Her father, Richard Sales, owned and ran GlassWing Recording studios out of the basement of their house. Night and day rap, folk and rock artists from the DC area came to record, their loud beats often vibrating the entire house and everyone in it.
At age three, Hayleys parents moved the family across the continent to Portland, Oregon, all they owned packed into the two moving vans. In Portland, Hayley's interest in music continued to grow. At 8, she picked up the piano and learned to play all the old jazz standards, and began writing her own songs. A few years later she fell in love with guitar.
Before graduating two years early from Northwest Academy, a private performing arts school in Portland, Hayley was blessed with the opportunity to interview the Dalai Lama, tour England with Shree Maa(a Hindu saint from India), fly to Washington DC for the WWII Ace Pilots Convention to perform old 1940s standards, act in over 80 plays, and grow about thirty years in one month as her brother underwent surgery after surgery for a brain tumor which he survived.
After graduating, Hayley moved up to the organic blueberry farm her parents had just bought (in true hippie fashion) on Vancouver Island, BC. The move was a shock, from the city to the middle of the country. Over the next several years, from sunrise to sunset , Hayley spent her time writing songs, learning how to run the recording studio and farming. She moved to LA for several months, pursuing a promising acting career, but returned to the island when she lost her voice due to acid reflux. For five months she couldn't sing, and then suddenly, one day it came back. Almost immediately she recorded her first record Drifter, sent it out, and met manager Frank Weipert (Teamwork Productions: Vancouver, BC). Hayley recently signed with Universal Music and has just finished cutting her new album SUNSEED which she produced, recorded and co-mixed. The album is to be released internationally this upcoming year. In the meantime, she keeps quite busy playing folk festivals, picking blueberries, surfing and enjoying the the peace.