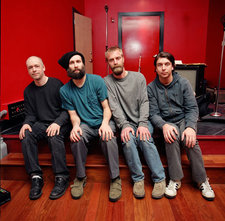 When Built To Spill wanted to find out what their music sounded like they locked themselves in Doug Martschs garage. Without a tentative conclusion or even a hypothesis the four members began to experiment. Their collaborative efforts lasted seasons and yielded dozens of hours of ADAT tape. The album You In Reverse documents the newest branch of Built To Spills chaotic, yet elegant evolution.

Doug Martsch formed Built To Spill in 1992. His intention was to sustain a project that would involve a rotating cast of musicians to record albums and tour. The first incarnation of Built To Spill included Doug, Brett Netson, and Ralf (Youtz). Recording in the middle of the night in order to get free studio time, they assembled 1993s Ultimate Alternative Wavers. For a few years and a few records band members came and went. In 1996, while recording the album Perfect From Now On (their Warner Bros. Records debut), Doug found a rhythm section he could not relinquish: Brett Nelson and Scott Plouf. This line-up toured and made records with additional guest musicians Brett Netson and Sam Coomes. In 1999, after the release of Keep It Like A Secret, Jim Roth joined the band as live co-guitarist.
No audio samples have been linked to this profile.
No member roster has been entered (to link to musician profiles.)
Status: Unknown
- Last confirmed Jun. 18, 2009
Submit info on this band to our admins