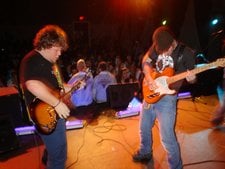 dustin dame
stopthemadness@hotmail.com
(250)-724-0811
Contact Info
Past Shows (30)
My Broken Hero was started in the winter of 2003 in the small city of Port Alberni, BC, Canada. Frustrated with the lack of music scene in their area, guitarist Tim Keizer and vocalist Dustin Dame decided to try and start a band. It wasn't the first time they'd tried to start a band but their previous attempts always ended up sounding like a bad Creed impression on Ritalin, which was strange because none of them even liked Creed, nor did any of them take Ritalin (although Tim probably should have). But when they began jamming with drummer Dave Colyn and bass player Cody Dame, something clicked and they started writing music that they actually liked. But still there was something missing from their sound. That missing something was found in Nik Vance, who walked up to them during a random jam session one day and said "I can scream". And lo and behold he could. And he could also play guitar and so he was added to the band. With each of their different musical tastes and influences all blending together they ended up with a sound somewhere along the lines of indie/punk/post-hardcore/emo/screamo/alternative rock...ish, and so My Broken Hero was born.
They began by playing small shows for their church youth group which consisted mainly of a couple of their own songs and a cover of Weezer's "Say It Ain't So". Everyone seemed to really liked the Weezer cover which was good because it was the only song they could actaully play well. And so they played it a lot and soon they became known as "that band that plays 'Say It Ain't So' real good" and they didn't like that very much so they stopped playing it (as much) and began focusing on writing their own music. They started playing more shows and after playing at a couple of camp talent shows, a fall fair, and various youth groups across Vancouver Island and the mainland word began to spread about them. Mostly they were nice words like "Oooo..." and "wow" and "you should be on American Idol". Some of the words weren't so nice but we won't talk about them because this is a band bio where we brag about ourselves and say how good we are. Thats sort of sad and lame when you think about it because its written by the the band which kind of takes away from the whole credibility thing but thats just how its done. And so now with the beginnings of a growing fanbase My Broken Hero plans to continue playing as many shows as they can wherever for whoever will let them play.
No audio samples have been linked to this profile.
No member roster has been entered (to link to musician profiles.)
Status: Unknown
anything anywere , we love to rock - Last confirmed Jan. 3, 2005
Submit info on this band to our admins