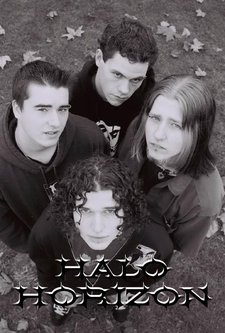 Ty Kingston
Tykingston@hotmail.com
604-463-7436
Contact Info
Past Shows (12)
Mix alternative, grunge, metal and a fistful of emotions and dedication, and you get the lethal combination that is known only by two words, Halo Horizon. Vocalist/Lead Guitarist, Ty Kingston, began recording/producing/playing all instruments himself and released the album, Run Away, in the late summer of 2003. After immediate attention and an ever growing fanbase, Ty felt the need to expand. In the winter of 2003, Ty had found other talented musicians that had been fans of his music since the release of his album. At this point, Halo Horizon was born. The energy and backbone of Halo Horizon now consists of Ty Kingston (Lead Vocals/Lead Guitar), Tyler Robinson (Rythm Guitar/Backup Vocals), Keenan Holness (Bass Guitar/Backup Vocals), and Cody Yates (Drums/Percussion). After only being a band for half a year, Halo Horizon has made an impression on every ear thats heard a note, every eye thats taken a glance, and every mind they've ever had the privilege to touch with their words and music.
No audio samples have been linked to this profile.

Status: Broken Up
- Last confirmed Feb. 25, 2014
Submit info on this band to our admins