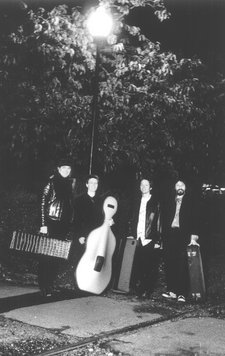 Alkemykal String Quartet from Victoria BC
http://www.tipper-violins.com/pearl/pearl.htm
Broken Up - Confirmed: May. 10, 2006 (Archived)

The quartet consists of Daniel Lapp on first violin, Cory Balzer from the Victoria Symphony on second violin, composer, grunge rocker and wild man of the viola, Kenji Fuse and the cellist/knee fiddler Linda Bardutz.

Peter Schickele is best known for his comedy albums featuring the satirical music of P.D.Q.Bach, yet his 'serious' music combines elements of diverse modern musical styles including folk and jazz for something truly unique and beautiful. You'll be left wondering why every string quartet doesn't include a kick-ass modern age hoedown in its repertoire, but then again, it takes eclectic musicians like those in Black Pearl to make this music come to life.
No audio samples have been linked to this profile.

Status: Broken Up
- Last confirmed May. 10, 2006
Submit info on this band to our admins