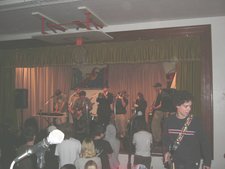 Ian
urassistchy@hotmail.com
1-250-472-1402
Contact Info
Past Shows (3)
o.o.o are a victoria ska dub reggea band who like to keep things slow
but will also pick it up with some high pace rock ska. O.O.O are a new band featuring many former members of the late ten too late, just trying to get seen and play some music.
No audio samples have been linked to this profile.

Status: Broken Up
- Last confirmed Apr. 20, 2007
Submit info on this band to our admins