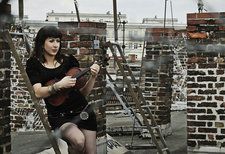 Brigitte Dajczer
brigamusic@gmail.com
514-576-9301
Contact Info
Past Shows (2)
Briga is the daughter of a Polish father, and a Québecoise mother.

Born in Québec and raised in western Canada before her return to Montréal, Briga’s music is a reflection of her fragmented identity: a hybrid of songs written in French and English, all accompanied by her fervent violin firmly rooted in eastern European and Romani folk sounds learned from the days her father played the piano to put the children to sleep. Baptised Briga by her fellow band mates in the ex-yugoslavian band Les Gitans de Sarajevo, her name means sorrow or burden. It can be used as an endearing term for loved ones (moje brigo… = oh my burden…)

The new album Turbo Folk Stories (Bahtalo Records 2012) comes to us a year after her touring through the Balkans playing Romani (Gypsy) weddings with Bulgaria’s no.1 Violinist and her mentor, Georgi Yanev (Георги Янев).

Inspired by these travels, Briga has brought back repertoire to her Montréal musicians and they have collectively arranged the new album. Turbo Folk Stories is a concept album that brings us back to a folk roots sound by featuring a mix of traditional Bulgarian, Macedonian & Serbian songs, as well as original repertoire that at times makes a light reference to the musical genres of Serbian Turbo Folk & Bulgarian Chalga.

Status: Unknown
- Last confirmed Jul. 3, 2012
Submit info on this band to our admins