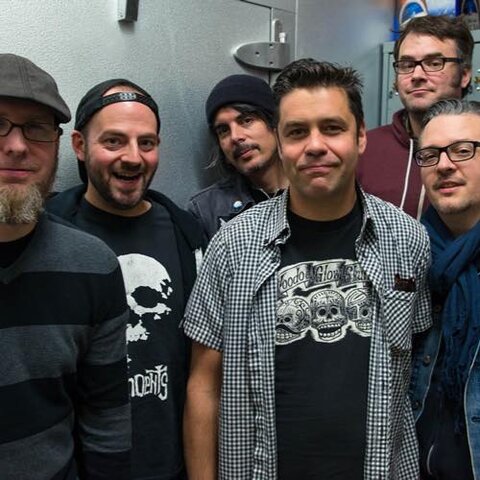 Mustard Plug are your brain on ska. As one of the fiercest and most singular bands to explode out of the early nineties ska-punk rush, the Plug have always set themselves apart from the rest with their DIY ethics and fun-fuelled intensity. Coming up in a Midwest scene that had little to no experience in ska music, the group applied their considerable work ethic to carve out a place of prominence, self-releasing the 1992 cassette tape Skapocalypse Now! and touring relentlessly across the nation. Generating their own buzz led to their debut full-length, 1994’s Big Daddy Multitude, being released on Moon Ska Records. From there, the Plug have set out across a twenty-plus-year exodus, releasing seven acclaimed albums, touring the globe (including Japan and South America), and bringing their aggressive yet positive blend of ska, punk, and hardcore music to legions of fans. As trombonist Jim Hofer puts it: “We may have some messages in our music, but essentially we just do this because we love it and we want people to lighten up and have fun.”

Although the line-up has shifted over the years, core members Dave Kirchgessner (vocals) and Colin Clive (guitar/vocals) still anchor the group. The Plug’s latest record, Can’t Contain It, is a testament to both their longevity and their self-built success. Funded on Kickstarter, and featuring guest contributions by MU330’s Dan Pothast and Andrew Jackson Jihad’s Sean Bonnette, the record is demonstrative of all the qualities that have made them indispensable stalwarts of the North American ska/punk scene: in-your-face horns, tight rhythms, and above all, a charismatic devotion to having a good time.
No audio samples have been linked to this profile.
No member roster has been entered (to link to musician profiles.)
Status: Available for Shows/Gigs
- Last confirmed May. 28, 2015
Submit info on this band to our admins