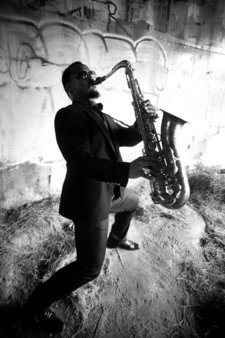 Karl Denson has led a storied career as a multi-faceted recording and performing artist who first came to prominence as a member of Lenny Kravitz’ band debuting on his first release, Let Love Rule, and staying on for the next five years. While developing a following overseas, he joined Fred Wesley’s band, touring and recording with him on multiple releases. This led to five straight ahead jazz albums by Denson on Minor Music, the last of which was released to rave reviews and featured Karl in a trio setting with Miles Davis alumni Dave Holland and Jack DeJohnette. In 1993, Denson joined DJ Greyboy in creating Greyboy Records and released the legendary acid jazz staple, Freestylin. Out of that collaboration, Denson formed The Greyboy Allstars, which became world renowned as the ultimate groove band, spreading their “West Coast Boogaloo” style worldwide.
Denson took this formula to the next level by putting more emphasis on vocals and adding some funk, R&B and hip hop elements. It turned out to be a winning combination, which set KDTU on the top of the heap in the touring world from 1999 through 2005, selling over 250,000 records to date. “My style is based in dance” shares Denson. “ I love the idea of creating something that naturally makes people want to move.” KDTU has headlined and performed at US Festivals including Bonnaroo, Bumbershoot, The New Orleans Jazz and Heritage Festival, All Good Music Festival, Wakarusa Music Festival, Playboy Jazz Festival, Monterey Jazz Festival, Newport Jazz Festival and many more. Global festival appearances include the Fuji Rock Festival in Japan, North Sea Jazz festival in Holland, Moscow Jazz Festival in Russia, East Coast Blues and Roots Festival in Australia and the Montreux Jazz festival in Switzerland. Karl Denson’s Tiny Universe has shared the stage with acts as diverse as Jack Johnson, D’Angelo, James Brown, Dave Matthews Band, Michael Franti & Spearhead, The Allman Brothers, Keene and Maroon 5.
Denson’s latest release, Brother’s Keeper, continues his artistic evolution fusing sounds from Rock to Funk to Afrobeat. Meshell Ndegeocello (bass) and Marc Ford (guitar, Black Crowes, Ben Harper) are just some of the special guests on the album. Denson notes, “I’m not one to live in the past. I am very much a forward thinker. Brother’s Keeper is a continuation of my general worldview, which is that we should be loving each other, having fun and taking care of one another.” He concludes, “This record is the culmination of all my life’s work up until now.”
No audio samples have been linked to this profile.
No member roster has been entered (to link to musician profiles.)
Status: Unknown
- Last confirmed Sep. 26, 2011
Submit info on this band to our admins