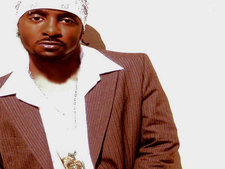 B Diamond
"B DIAMOND"

B DIAMOND. Known as the underground R&B king or some may call him “DIAMOND IN THE RUFF” or simply “B DIAMOND the legend”. You may have seen him performing longside acts like LIL FLIP, YUNG JOC, THE GAME, E40, ICE T, ICE CUBE, SNOOP DOGG, FABOLOUS and KC & JOJO and that's just to name a few.
B DIAMOND has been making music waves all the way from New Orleans LA (his native land) where he grew up on some of the roughest streets where if you made it off the front steps in the early 90's you were considered a “G”. B DIAMOND came to Vancouver BC Canada, which he likes to call "RAIN DROP CITY", in the mid 90's with a well known R&B group called High Quality Band. After leaving the band to work on his own music, B DIAMOND in 1998, dropped his first single “Same Old Game” under the independent record label DACRIM RECORDS. That track made B DIAMOND the first solo male R&B artist to have a song played on a major radio station in Vancouver BC and the first to have a video played on Much Music. With his label and management team, at the time not seeing eye to eye, his label and management team decided to part ways but he didn't let that stop him!
In 2005 B DIAMOND recorded the song “Let's Party Naw” that featured “Concise the Black Knight”, a local hip/hop artist from Vancouver BC. “Lets Party Naw” was entered into a local radio station's battle of the beats. B DIAMONDS song won 3 consecutive nights in a row with making history no other artist had done this "land slide wins" but the radio station decided to change the rules of the battle to 4 wins the day after B DIAMOND should have won the battle. The radio station gave the win to a R Kelly, Ashanti, and Ja rule song. B DIAMOND didn't stop there. He started working with every local artist across the U.S.A. to Canada. Artists like, Concise the Black Knight, Check Mate, The Camp, PTown Mo, Vic Vodka, PMAN, Red1, Baldy Loc, OCP Crew, Kanabliss, Trajikk, The Titans, Haze entertainment, Crown604, Keep6ix and the list is continuing to grow to date. "When you need a tight hook, B DIAMONDS the man you gotta call and that’s that". B DIAMOND has been compared to some of today's top acts such as R Kelly, JAHEIM and Ginuwine but he's not just a singer. After Hurricane Katrina devastated New Orleans In 2005, BDiamond returned to Vancouver Canada and co found and became a member of an underground movement that supports local artists called "THE KOALLITION", B DIAMOND formed a hip/hop group of five members named "DEM BLOCK BOYZ". B DIAMOND produced and recorded a mix tape "The Blockz is Watchin" which featured Dem Block Boyz. The cd was named "one of the best local underground mix tapes of 2006". To this day people still ask about that cd and the group. The group and B DIAMOND performed at every local venue across rain drop city. A year later, B DIAMOND parted ways with DEM BLOCK BOYZ due to conflicts within the group. “They were just too good, too strong minded to work together as a group”. B DIAMOND continued as a solo R&B artist. In 2007, B DIAMOND along with his new management team Jenn&Juice, formed a R&B tour called "POP N BOTTLES" which featured B DIAMOND along with some of Vancouver’s hottest acts. In 2008, B DIAMOND (with help from his team Rasta Moves, Jenn&Juice management and Mo Suntzu) promoted a mix tape called “The Guerilla Movement Vol.2 Play list” which was hosted by DJ Kay Slay. B DIAMOND, with more features on this mix tape then any other artist, helped make this cd one of the illest mix tapes of 2008! Having said all that…. In 2009 B DIAMOND prepared a tour across Canada and the U.S.A. and still going today so keep your ears and eyes open for the coming of a rising legend we like to call The King of R&B, B DIAMOND.
Next moves Best Of the Best, 2010 Olympics Performance, South Africa Tour!
Stay tune!! 2011 is going be MAAAD!!
B Diamond is #20 on Reverbnation Charts for top R&B in New orleans

To hear his amazing voice and sound go to
www.reverbnation.com/bdiamond
www.myspace.com/bdiamond504