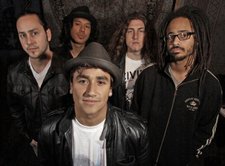 In this increasingly uncertain economical and political world we live in, Tomorrows Bad Seeds prove to be extremely talented musicians, vocalists and entertainers as a whole, using their music to spread conscious lyrics for the conscious mind. In 2007 Tomorrows Bad Seeds signed with Urbantone Records as a vehicle to spread their seed, the band released their debut album "Early Prayers" in June 2007, featuring the singles Rhyme & Reason, Vices, Warrior Poet and Love Street. (Love street hit # 3 on the Hawaiian charts.) Tomorrows Bad Seeds released their sophomore record entitled “Sacred For Sale” on May 25th, 2010 with UrbanTone Records, distributed by MRI a subsidiary of Sony/RED. You can find Tomorrows Bad Seeds music online on Itunes, Amazon, CDbaby, etc. and some retail stores. Our fans can reach us on top social media sites such as Myspace, Facebook, Twitter and on our official web page. “We’re so versatile because we come from such a melting pot of music here in the South Bay,” Moises said. “…We all grew up on punk, and then hip hop kinda came and took over, but we all loved oldies back in the day…we all surf too…it’s really just a blend of everything.”
No audio samples have been linked to this profile.
No member roster has been entered (to link to musician profiles.)
Status: Unknown
- Last confirmed Oct. 24, 2011
Submit info on this band to our admins