Hardcore & Fast Punk Rock from Victoria BC
http://www.myspace.com/theneos
Label: Supreme Echo
Broken Up - Confirmed: Jun. 3, 2009 (Archived)
the Neos were true pioneers of hardcore, critically acclaimed as one of the very first of their kind. In attempt at being the "world's fastest band", the teen trio formed in 1979 in the sleepy suburbs of Victoria, BC on Vancouver Island; their name came from characters in a Woody Allen film. Although they gigged infrequently, they still managed to play with the likes of the Subhumans, Black Flag, and Dead Kennedys (who made a fan out of Jello)...likewise they were regularly corresponding with members of Deep Wound, Ohlo Seco, Terveet Kadet, and many more veterans of the genre. A little known tid-bit is that Nomeansno's debut live show and first tour was infact opening up for the headlining Neos. They self-released two 7" EP's in 1982 on the pseudo-label Alandhiscar; "End All Discrimination" (11 songs - rec. '81, 500 copies) and the "Hassibah Gets The Martian Brain Squeeze" (14 songs - rec. '82, 500 copies). Ratcage records out of NYC repressed the second EP in 1983 thru Southern UK, subsequently pressing 3000+ copies, and essentially cheating the band out of their royalties. They managed to tour the west-coast of N.A. making it all the way to San Francisco, however personality differences led them to break-up at the end of 1983.

Steve and Kev continued on for another year as Harvest of Seaweed (a "recording group" only), releasing a cassette in 60 & 90 minute versions, as well as guest starring on the Jerk Ward "Flesh & Bones" demo (now issued on vinyl). Summer of '84, Kev formed Sludge Confrontations with John of Jerk Ward, releasing some demos between '84-'86, and later a posthumous discography CD. Neos members eventually went on to play in Mexican Power Authority and the Showbiz Giants.

Despite being fairly obscure, the Neos still remain very influential, even having their songs covered by Charles Bronson, Coconut Bulldozer, Spazz, Hated Principles, Mexican Power Authority, and NOFX. They're noted as a major influence for such pioneering groups as: Deep Wound, Hirax, DRI, Napalm Death, and many more. In 1995, a posthumous 7" EP titled "Fight With Donald" was issued by Break Even Records featuring the unreleased song 'Sleeve'. In 1997 a CD of the first two EP's plus 'Sleeve' was issued by Break Even. All Neos material is presently out of print.

Supreme Echo Records from Victoria are proud to reveal the discovery of Neos videos, and the original "Hassibah..." stereo-master tape! 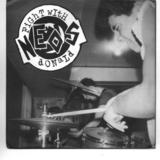 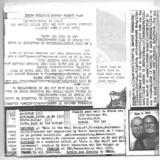 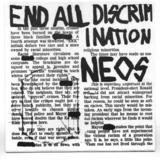 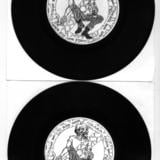 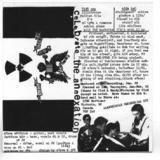 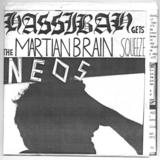 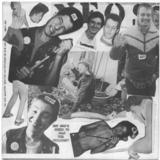 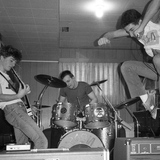 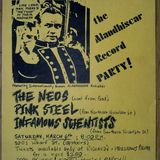 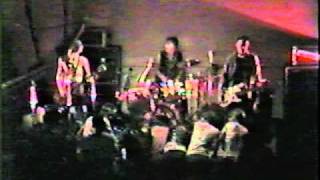