Rock N Roll from Vancouver BC
http://www.pigeonparkmusic.com
Label: none
Available for Shows/Gigs - Confirmed: May. 14, 2015 (Awaiting Update)

Pigeon Park
info@pigeonparkmusic.com
Contact Info
Past Shows (29)
There is an old expression that sums up Vancouver’s Pigeon Park and has acted as an inspiration for their forthcoming six-song EP entitled Stripes.
For the hard-rocking quintet the phrase ‘earning your stripes’ has a profoundly personal meaning. It refers to the countless hours rehearsing, touring and toiling – doing everything it takes to become better musicians, better songwriters and a better live act. It comes from a military tradition whereby a solider would show the dedication, professionalism and attitude to move up the ranks and get another ‘stripe’ on their uniform.

The album’s title track came to represent the sense of perseverance, integrity and resolve that the band has brought to its music and its overall ethos since the long-time friends came together to form Pigeon Park in 2008.

“The song Stripes wasn’t on the table for recording early on but we fought for it” said Weber. “The song is about earning your place in life whether it’s through your work or through your creativity or who you are as an individual.”

To earn some of their own stripes, the band slogged its way through the highly competitive 99.3 CFOX ‘Seeds’ competition in 2013 before being named the Platinum Winners and garnering studio time with Richardson as part of their prize. The victory also put them in some pretty elite company, as past winners of the competition have included the likes of Nickelback, Default, Bif Naked, Theory of a Deadman and Matthew Good.

“Working with Garth was an amazing experience. We were a little nervous at first but he’s a great guy and easy to get along with. He did an incredible job of helping us refine the songs we brought into the studio.” Weber said.

“He also helped us develop as songwriters. He is brutally honest and will tell you if he thinks your song sucks. Not a lot of people will be that honest. He challenged us to be better every day,” added Okabe.

Pigeon Park has been going full speed ahead since the band’s inception. When they’re not on the road – which is rare – the band members are constantly writing new material. When it came time to step into the studio to record “Stripes” they were more than ready to begin.

“If you spend enough time doing something you’re going to get good at it. And we have been pretty much non-stop in terms of the writing, recording and touring cycle. It’s been an intense last couple of years but we have done so much, learned so much, and are so much better as individual musicians and as a collective group,” said Weber.

“Being on the road so much keeps us sharp and really tight as a band. Our bread and butter has always been our live show so we wanted to capture that energy and excitement on this record,” added Okabe.

The result is an album that unashamedly incorporates the band’s classic rock and funk musical influences with more modern heroes such as the Red Hot Chili Peppers and The Raconteurs. Pigeon Park’s music sounds neither derivative nor formulaic, but yet it is still melodically and harmonically rich with memorable appeal across a broad range of music lovers. In short, the music on Stripes is original, accessible and really rocks.

The lead-off single, Walk Alone, comes from the point of view of someone looking back on their recent past at a trail of broken hearts – including their own. “The song comes from my own personal experience of both breaking up with someone and getting broken up with by someone. It touches on both sides of that situation. And it’s about realizing that sometimes you need to be by yourself to really figure out if you are okay enough to be with somebody,” Weber said.

The more groove-oriented Long Gone picks up that theme but comes at it from someone who is a little further along the self-discovery continuum. “It’s the same subject matter but with a more confident attitude” said Weber of the song. “It’s not about giving the proverbial middle finger to the relationship, but rather shaking the dust off your boots and moving on.”

Part of the process of earning their ‘stripes’ saw Pigeon Park tour extensively through 2014, across Canada, including opening for Aerosmith and Slash, The Tea Party, Sam Roberts, Big Wreck, and Scott Weiland. They also released their first two radio singles, in support of their previous EP “Black Widow”, both of which cracked the Rock Radio Top 40.

“Playing with these seasoned acts was a real learning experience. We watched their every move – from how professional they were at meet-and-greets to going onstage and just kicking ass night after night. It was a really cool experience to have bands of that calibre invite us into their world and show us how it works,” said Weber.

And the wisdom and experience gained from touring has paid off not only in Pigeon Park’s live performances, which are tighter and more energized than ever before, but also in the level of professionalism they have attained as songwriters and as a recording act.

The release of Stripes sees a band that left everything on the floor creatively. It’s an album that packs a powerful musical punch with intelligent, well-crafted, meaningful and memorable songs that will undoubtedly see Pigeon Park earn the same sort of respect, accolades and success as their musical heroes.
No audio samples have been linked to this profile. 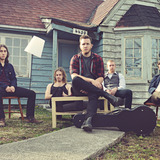 Status: Available for Shows/Gigs
touring - Last confirmed May. 14, 2015
Submit info on this band to our admins