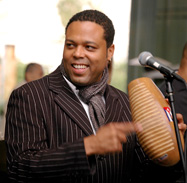 Victoria fell in love with the Cuban-born Puentes Brothers many years ago, back when their first album was Juno nominated and won several other awards. The Puentes Brothers broke up nearly a decade ago, allowing Adonis Puentes to pursue his own musical vision. In 2005 this soulful and gifted singer released his first solo recording, Vida, and his modern, dance-friendly take on traditional Cuban music got lots of national airplay and earned Adonis additional awards. An increasingly mature and compelling singer – even the legendary Juan de Marcos calls him a true soñero – the charismatic Adonis now tours widely throughout North America and Europe where he performs his complex and highly melodic style of Cuban music for enthusiastic audiences. He plays with Miguel Valdes trumpet, Pablo Cardenas piano and Jack Duncan congas.
“He thinks of himself as a missionary, spreading a mix of soulful balladry and dance-friendly Cuban vibe to eager ears, hearts and hips.” –the star.com
No audio samples have been linked to this profile.
No member roster has been entered (to link to musician profiles.)
Status: Unknown
- Last confirmed Nov. 18, 2012
Submit info on this band to our admins