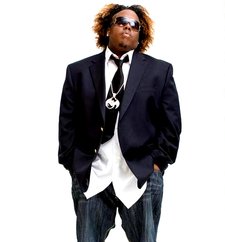 Born in Kansas City, MO., KRIZZ KALIKO was raised by a mom who spoon-fed him music. As an opera and gospel singer, as well as being the choir director of their church, his mother sang to him and, fortunately, made him sing with his sisters. He performed in the choir all throughout his early teens and his mom often treated the family to live concerts from artists like the Gap Band and Run-DMC. By the time KRIZZ KALIKO met Tech N9ne, he was already trying to figure out how to fuse opera and Hip Hop.

It’s not every day a musical genius is born. With the release of his second solo CD, GENIUS, KRIZZ KALIKO convincingly claims that title. After working with Tech N9ne and Strange Music for 10 years, performing over 200 shows a year, KRIZZ KALIKO has earned a spot among Hip Hop’s elite. His solo debut, 2008’s Vitiligo, landed at No. 19 on the Billboard charts and he has been instrumental in Tech N9ne’s incredible success: In 2008, Tech N9ne SoundScanned over one million units, making him the most successful independent Hip Hop artist in history.
No audio samples have been linked to this profile.
No member roster has been entered (to link to musician profiles.)
Status: Unknown
- Last confirmed Dec. 20, 2010
Submit info on this band to our admins