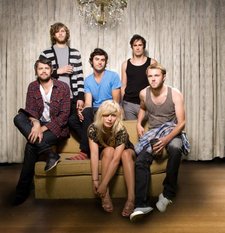 The Head and the Heart

Composed largely of transplants to the Seattle area, The Head and the Heart write and play songs that speak to the newness of a fresh start, of the ghosts left behind, of moving forward, all brimming with a soulfulness and hope for a better life than the one we've all been sold.

Stylistically, think a folksy Beatles or Crosby Stills Nash & Young with more instrumental force. Catchy piano melodies stand side by side with a tight trio of harmonies, and solid minimalist drums, groovin bass, and plenty of hand percussion and foot stomps make the live show inspiring and really goddamn fun.

The band's eponymous first album was self-released at the end of June 2010.
No audio samples have been linked to this profile.
No member roster has been entered (to link to musician profiles.)
Status: Unknown
- Last confirmed Oct. 8, 2010
Submit info on this band to our admins