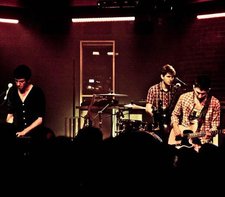 In March 2011 the band released their debut EP entitled "And So It Was" to a sold out crowd at Victoria's Lucky Bar. The album was entirely written, recorded, mixed, and distributed by Sunhawk.

In summer 2011 the band released its debut music video for a single called "Shotgun Love", which was filmed at Club 9ONE9 in Victoria. In September 2011, Sunhawk performed at Royal Athletic Park as a part of Victoria's Rifflandia Festival, sharing a venue with the likes of Mother Mother, Cold War Kids, Broken Social Scene and City and Colour.

With an array of new tunes set to be released in 2012, Sunhawk is a band to keep a close eye on.
No audio samples have been linked to this profile.

Status: Unknown
- Last confirmed Feb. 16, 2012
Submit info on this band to our admins