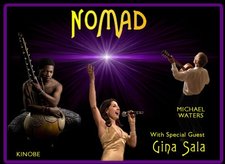 The acoustic world music duo Nomad will be joined by Cirque du Soleil vocalist Gina Sala for an intimate concert at the Church of Truth. Nomad is Kinobe, a young master of the 26 string African harp known as the Kora, and Victoria based virtuoso guitarist Michael Waters. They are joined this year by Gina Sala, after an impromptu performance with her last year brought down the house. Seattle-based Gina recently spent a year as the lead vocalist for the Cirque du Soliel in Las Vegas, and has established herself as a global artist, able to sing in 23 languages.

Kinobe has been playing music since the age of five, and began touring Europe with an African ensemble when he was ten. Based in Kampala, the capital of Uganda, he spends much of his time travelling into the more remote parts of the country to play with musicians still steeped in the tribal traditional styles. His fascination with the Kora came from hearing the Mali virtuoso Toumani Diabate play. “As soon as I heard him play, I knew this was the instrument I would go deepest with’” says Kinobe. “Even though it is not a traditional instrument from my country, it still speaks to me of my land and people.” Kinobe also plays the kalimba (thumb piano) and percussion instruments in his shows. His music can be heard at www.nomadroots.com.

Michael Waters has grown a strong west coast following through performances in churches and theatres over the last five years. After 33 years playing guitar as a spiritual practice, Michael’s 2004 encounter with the medicine traditions of the Amazon triggered a 16-month wave of composition and a complete shift in his approach to music. He decided at that point to begin performing publicly. He combines soaring guitar virtuosity and a new genre known as acoustic psychedelic chill.

More info: http://www.nomadmusic.ca and http://www.ginasala.com
No audio samples have been linked to this profile.
No member roster has been entered (to link to musician profiles.)
Status: Unknown
- Last confirmed Apr. 28, 2010
Submit info on this band to our admins