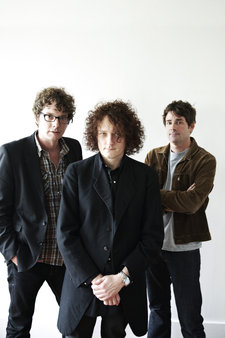 Shannon Martin - Aporia Records
Shannon@aporia-records.com
4169448034x115
Contact Info
Past Shows (14)
Brothers Tom and Chris Hooper met Kevin Kane in 1977 during their teens in Kelowna, British Columbia. Their first band was a punk combo called Kill Pigs which played faster than the singer could sing. From there, Kane and the Hoopers went on separate musical paths; Kane to art-rock group Empty Set and the Hoopers forming the hardcore punk band Gentlemen Of Horror. The Gentlemen were popular playing in and around Vancouver and released a now highly sought after 7″ single in 1980. During this time, Tom Hooper edited a local punk ‘zine called ‘Indecent Exposure’, to which Kane and Chris Hooper contributed.

In April of 1983, after putting together a one-off show as cover band Honda Civic, the trio decided to work together musically again. From the Hooper family garage they began rehearsals and gained enough confidence to open for acts in Seattle and Vancouver as the newly christened Grapes Of Wrath (from the classic movie of the same name).

By raising money at flea markets and garage sales the act was able to record 4 songs with up-and-coming producer/engineer Greg Reely in July and August 1984. Unbeknownst to the band, a cassette recording of the material was passed along to Terry McBride of the newly formed Nettwerk Records in Vancouver, which led to the band being signed and releasing the tracks as a self-titled EP in November 1984. The band played a farewell gig in hometown Kelowna, packed up Tom’s station wagon and the Grapes Of Wrath moved to Vancouver.

In late summer of 1985, Nettwerk released the first album ‘September Bowl Of Green’, which dented college and alternative radio. Their first two videos “Misunderstanding” and “A Dream (About You)” were heavily rotated by MUCHMusic. This attention led to Nettwerk’s negotiations with Capitol Records for a distribution deal and the band returned to the studio in May 1986 to remix “Misunderstanding” and “Love Comes Around” with Tom Cochrane. These remixes would be issued on the ‘September Bowl Of Green’ CD re-issue. The band continued playing live including a high profile show at the 2nd Annual Independent Music Festival in 1986.

Cochrane was sufficiently impressed enough to produce the band’s sophomore effort ‘Treehouse’ which was released in October 1987, resulting in their first gold album for sales in Canada and yielding a minor hit with the single “Peace of Mind” and fan favourite, “Backward Town”.

Ex-Pere Ubu and Lounge Lizard/Golden Palomino drummer Anton Fier produced ‘Now And Again’ in Woodstock, New York, where the band lived in isolation for the first half of 1989. They record in an old haunted Catholic church called Dreamland Studios.

Now and Again, was the band’s big breakthrough. The singles “All The Things I Wasn’t” and then “What Was Going Through My Head” propelled the album to platinum status and soon the band went from playing bars to theaters and touring Europe, opening for Lloyd Cole. Their Canadian tour to support this album was also notable for it’s opening act, a then-emerging singer/songwriter named Sarah McLachlan.

Englishman John Leckie (XTC/Stone Roses/Posies) helmed ‘These Days’ which was recorded from December 1990 to January 1991 at Vancouver’s Mushroom Studios. In February 1991, the band travelled to London and spent 3 weeks mixing at Abbey Road studios. The Album spawned the hit singles “I Am Here” (#8, and peaking at #27 on Billboard Modern Rock Tracks in the U.S.) and “You May Be Right” (#7), again selling platinum and allowing the band to again tour Europe.

Musical and personal differences brought about the band’s demise in 1992 with the departure of Kevin Kane. The Grapes Of Wrath’s final show was Halloween 1992 in Vancouver.

In the summer of 2010, after 18 years, the original founding members joined together to play the Surrey B.C. Fusion Festival. Due to the show’s success, the band is once again touring Canada and in February 2012, signed with Aporia Records of Toronto to record a new album. This will be the first album of new music by the original members in over 20 years.
No audio samples have been linked to this profile.

Status: Unknown
- Last confirmed Feb. 28, 2012
Submit info on this band to our admins