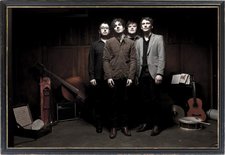 Monarch, originally from Pittsburgh PA, signed to Northern Records of Orange County where they released "The Grandeur that was Rome" in 2003 and "lowly" in 2007, featuring collaborations with members of the bands OneRepublic, Pedro the Lion, and Starflyer 59. As their music has been dubbed as “melodic-driven indie pop,” Monarch has been compared to bands like Elbow, Sigur Ros, Keane, and Denali.
No audio samples have been linked to this profile.

Status: Unknown
- Last confirmed Nov. 15, 2010
Submit info on this band to our admins