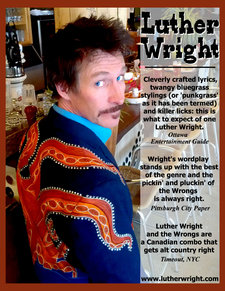 Luther Wright has been writing, recording and performing music for over 16 years now. In 1994 he joined up with Sarah Harmer to play lead guitar in the Canadian, pop-rock band, "Weeping Tile" (WEA/Atlantic). During the next 5 years of full-on touring and recording Luther and his roots compadres formed the now-renowned, country/punkgrass road daemons, "Luther Wright & The Wrongs".

Known on one hand for their brilliantly executed, country/bluegrass reworking of Pink Floyd’s classic The Wall, Luther and the band have also recorded and released three all-original albums, Hurtin' For Certain (1997), Rogers Waltz (1999), the valentine gone awry, Guitar Pickin' Martyrs (2003), and the recently released, Instrumentality. Also to boot, they made two cds of original childrens music under the guise of Butterfingers.
From its release internationally in 2001, Rebuild the Wall (Universal/Backporch), opened up doors for 'the Wrongs to play over 500 shows of old-country, inspired music across the continent. He has had his music used in the CTV television show, "Robson Arms", and his song "Tumbler Ridge" is part of the soundtrack in Ron Mann's documentary film about Woody Harrleson entitled, "Go Further". And at the request of the Goodman family Luther contributed a version of "The City Of New Orleans", to a recently released cd that pays tribute to folk legend Steve Goodman.

Luther performs either with ‘the Wrongs, as duo with mandolinist Dan Whiteley, or collaborating in the "Hootenanny Revue". The show features a plethora of Canadian, alt-country stars including Jenny Whitleley, Carolyn Mark, Oh Susanna, Jim Bryson, Hank & Lily and Shuyler Jansen.