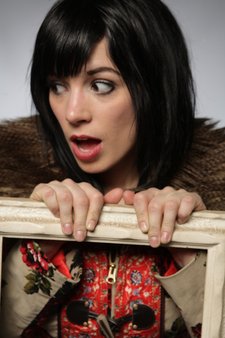 From the opera stage and the ranks of a military band into indie music, Sidney York is proof that band geeks are cool.

Revered for her abilities as an enigmatic vocalist, guitarist, keyboardist, ukelele and French horn player as well as an unyielding Do It Yourself mentality, in three brief years York has levelled the world of music with a stunning independence exemplified on her eponymous 2009 debut. A rousing bastion of haunting melodies, insightful lyrics and innate creativity, Sidney York epitomizes the union of inspired creativity, dexterous ability and arresting longevity.

With a host of bestowments including Best Untapped Newcomer at the Calgary Folk Fest, featured rotation on the Bravo channel's video playlist as well as 150 live shows across Canada in a single year—booked and arranged autonomously, York's prowess and dedication are more than paying off. She has played the Calgary Folk Fest, South Country Fair, and Mountain View Music Fest, and has shared the stage with notable performers Chad VanGaalen, Ridley Bent, Fred Eaglesmith and Michael Bernard Fitzgerald.

"[Dick & Jane] is insanely catchy—I bet you'll find yourself whistling along at random points during your day." --3AM Revelations, on Sid's single 'Dick & Jane'

"[Dick & Jane]'s got me smiling, dancing, whistling, singing, bobbing, weaving and building Lego all at the same time." --More Than a Feeling, on Sid's single 'Dick & Jane
No audio samples have been linked to this profile.
No member roster has been entered (to link to musician profiles.)
Status: Unknown
- Last confirmed Sep. 20, 2011
Submit info on this band to our admins