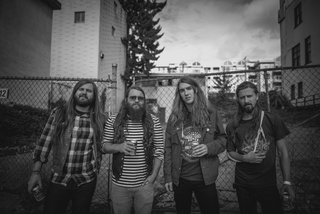 Eug
black.wizard.band@gmail.com
Contact Info
Past Shows (63)
Event Photo Galleries (3)
Already reaping critical hails from media outlets globally, BeatRoute Magazine champions BLACK WIZARD for being, “the only band in town that will add inches to your dick,” while The Obelisk offers, “While basking in the hazy light of an increasingly prevalent (particularly in the Pacific Northwest) post-Red Fang neo-dude party vibe, the four-piece of guitarist/vocalist Adam Grant, guitarist Danny Stokes, bassist Evan Joel and drummer Eugene Parkomenko also pay due homage to Thin Lizzy, Iron Maiden‘s gallop and Judas Priest‘s fist-pump-ready groove. Their tones and upbeat style find breadth in the inclusion of organ on the slower ‘Laughing And Lost’ and the Spanish guitar ending of ‘Vivian Girls,’ the plus-sized riffing of ‘Unnecessary Evil,’ but they never go too far from that metallic underpinning, tying the album together as a unified whole even as individual songs stand out across its span.” Sonic Abuse boasts, “Taking the best bits from thirty years of heavy-ass metal, there are hints of Priest, Maiden, Sabbath, Purple and more, all wrapped up in BLACK WIZARD’s own, patchouli-scented haze. The prog aspects of the album help to make the sound more unique and interesting and the delivery is spot on – gritty and brutal and yet with a deft touch that keeps things interesting throughout. If you like your metal to veer on the traditional and yet to offer an eclectic edge to keep things interesting, then you’ve come to the right place.” Metal Asylum concurs, “If you have the itch for slightly sludgy, earthbound, ‘70s-influenced metal, then BLACK WIZARD will scratch it,” as does Unholy Music, who lauds the band’s, “ slow, adventurous and twistedly dark psychedelic sound.”

In a 4/5 score, Sea Of Tranquility notes, “With plenty of modern as well as vintage influences seeping in, New Waste has something for every metal/hard rock fan. Doomy, bluesy, proggy, psychedelic, and just plain old heavy…it’s all here.” Ave Noctum commends, “a solid and thoroughly enjoyable record… that will satisfy both the dyed in the wool metal traditionalists and those who are looking for something new.” Team Rock notes, “With a name like BLACK WIZARD, you might expect a band scouring doom’s dark underbelly and spinning your brain into a state of dreamy lethargy, but this four-piece from Vancouver offer an all-round chuggier endorsement of Satan’s songbook…this album prefers to take you on a bong ‘n’ roll journey of odes that would appeal to anyone cast under Red Fang’s spell.” Adds Hellbound in an 8/10 rating, “If you’re looking for the sounds and traditional metal of Motörhead, Priest, Maiden, Thin Lizzy and Sabbath, one can look no further. Also, for a new label debut, Listenable couldn’t have asked for a better album of catchy, crunchy and exciting songs.”

More recently BLACK WIZARD has kept busy touring Canada and the United States and spent last Fall on a month-long trek through Europe. Having shared stages with the likes of Sleep, Uncle Acid, Corrosion Of Conformity, The Shrine, Atomic Bitchwax, Weedeater, Saviours, Anciients and so many more, the band shows no signs of slowing down anytime soon. No one is safe
No audio samples have been linked to this profile.

Status: Available for Shows/Gigs
ready and willing - Last confirmed Feb. 15, 2016
Submit info on this band to our admins