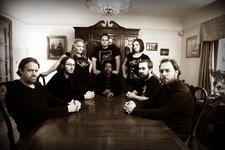 Where as The 12th Street Blues documents the evolution of the group over its 3 1/2 years of production, We are The Blaxstonz, completed over that many months captures everything The Staxx Brothers gained in establishing its definitive line up. Out of the wilderness years, DP Staxx & his back up singers The Staquelettes cut their teeth on the Staples and dined on the Carters. The band however stood the most to gain from hard time on the road; developing a sound as heard on deep cuts like ‘G-Spot’ & ‘Game Recognize Game,’ which has led many impressionable young women to collapse from sheer exhaustion. While many church groups have called these dark rhythms an abomination and an immediate threat to our nation’s youth, it takes but one listen to the sabers rattlin’ and heads rollin’, on songs like ‘Almost Got Shot in North Minneapolis’ & ‘Little Big Time’ to know these accusations are of merit.
No audio samples have been linked to this profile.
No member roster has been entered (to link to musician profiles.)
Status: Unknown
- Last confirmed Jan. 7, 2010
Submit info on this band to our admins