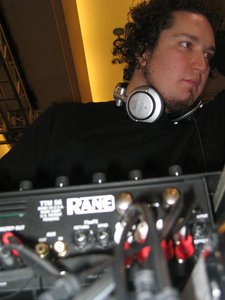 ho is The PhonoGraff? The Phonograff is Mike Jones (real name folks!). The Phonograff has been DJing for over a decade. The name ‘The PhonoGraff’ was given to Mr.Jones by Moka Only (Canadian Hip-Hop Veteran) to help represent and signify his love for both music and graffiti. Originally hailing from Kamloops BC, he has been building in Vancouver for the last 6 years. In 1999, Phonograff released a critically acclaimed mixtape called ‘Train of Thought’, selling more then 500 copies hand to hand with no distribution. That mixtape featured tracks from West Coast underground legends and the first journeys into his own musical production. When Phono realized that he was able to cut a living out of making music, his path was forever changed. From that point forward he started to focus on building a sound through his production and live DJ shows that would be synonymous with The Phonograff. “From the Bottom Up” is The PhonoGraff’s debut full-length album. It consists of 19 tracks fully produced by Phono and features 16 guest emcees and vocalists to complement his eclectic sound. The guests range from such Canadian Hiphop heavyweights as Moka Only, Kia Kadiri, JC Subliminal to US Living Legend Luckyiam.PSC. The album also features some of the West Coast’s sickest underground cats from Edge 1 and Just B to singer/songwriter Coco Love Alcorn. When asked to describe his sound, Phono replies, “ It’s straight up hip-hop. I’m fusing roots reggae, dub, latin jazz, electronic music and huge beats with heavy bass and warm elements, all the while keeping the turntablism and scratching in the mix.” A Turntablist is someone that needs to be seen as well as heard, and The PhonoGraff has a live show to be reckoned with. Phono has already opened for an impressive list of artists, including 50 Cent, Blackalicious, Lady Sovereign, Alkaholiks, Jurassic 5, Digable Planets, Zion I, Living Legends, Kirby Dominant, Maestro Fresh Wes, Sixtoo, Mr.Dibbs, Swollen Members, plus countless others.
No audio samples have been linked to this profile.

Status: Unknown
- Last confirmed May. 6, 2010
Submit info on this band to our admins