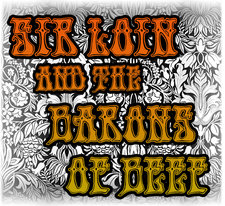 Sir Loin and the Barons of Beef

Riley Janzen
haggard05@gmail.com
250 2162810
Contact Info
Starting as an informal jam group, they would rehearse in Devo's garage and would record randomly improvised songs (which they still do) under the name of Kaleidoscope Eyes. Now they have set up shop in Riley's garage, converted into a jam-den and are starting to take the group seriously, which provoked a name-change. The band is now jamming under the name of Sirloin and the Beef Barons, suggested by Duncan Clarke. In the near future they are planning on playing some gigs and writing more original material.
No audio samples have been linked to this profile.
No member roster has been entered (to link to musician profiles.)
Status: Unknown
We are seeking an organ player. - Last confirmed Sep. 15, 2009
Submit info on this band to our admins